Indra Jatra is one of the biggest eight-day long street religious festivals of the Newar community in Kathmandu, Nepal which was started by king Gunakamadeva in the 10th century. Indra Jatra is also known as “Yenya” in the Newari language. Ye means “Kathmandu” and Ya means “celebration”. In the Nepali language, Yenya means a festival that is celebrated in Kathmandu with the unity of different religions and ethnicities of local people. This festival also marks the end of the monsoon and welcomes the beginning of the Autumn season.

Many believe, that Indra Jatra is the day for thanking lord Indra for the rain as well as celebrating in the honor of Lord Bhairav, who destroyed the evil in one of the forms of Lord Shiva. According to Hindu mythology, “Indra is the lord of rain, prosperity, and king of heaven”. The festival is celebrated by the Nepalese people to pray – Dagini and Indra, for the good harvest and remembrance of the deceased in the past year. According to our ancestors, the Indra Jatra festival is declared to celebrate the victory of the gods over demons and to release Jayanta, the son of Lord Indra. It is believed that the king of heaven, Lord Indra once plucked the flowers from the valley for his mother’s “Basundhara” ritual. The people saw him while plucking the flower from the mortal king’s garden and considered him a thief, so the people caught him and tied him with rope. He was then displayed in the town square of Maru tole in Kathmandu. In order to free her son, his mother appeared in Kathmandu Valley. when the city of people realized that they had captured Lord Indra, they were frightened and instantly released him. In exchange for her son, she promised to provide people with enough dew, cloud, fog, and rain for good harvesting and better crop growth. This is one of the reasons to celebrate Indra Jatra. Historically, the importance of Indra Jatra is the integration day of Nepal as king Prithivi Narayan Shah acquired the success over king Jaya Prakash Malla of Kantipur.

How is Indra Jatra celebrated?

Indra Jatra or Yenya festival consists of two parts. They are:

The celebration of Indra Jatra consists of a Flag pole ceremony (which is 36 feet long pole made from a pine tree), a display of a Bhairav mask, blood sacrifice, etc. During Kumari Jatra, the living goddess will take a four-wheel carriage to march through the streets of Kathmandu. The Indra Jatra sequence begins on the day of Bhadra Shukla Dwadashi in front of Hanuman Dhoka with a religious ceremony with an IndraDhwaja which is followed by different types of dances, singing, and worshiping of various deities.

The festival begins with the erection of Yosin or Linga-the wooden pole from which the flag of Indra is unfolded at Kathmandu Durbar Square (Basantapur). A tree shorn of its branches is stripped which is brought from the forest near Nala (a small town which is 29km to the east of Kathmandu). Later, it is dragged in stages to Durbar square by men pulling on ropes. This event is called “Yosin Thanegu”. Indra Jatra is celebrated by raising poles representing Indra at various localities around the city. The poles are also known as Yambodyah. The admirer visits the shrines holding the light with heartfelt remembrance of the passing members of the family. This event is called “Pakuranga”. The end of Indra Jatra indicates the beginning of the Nepalese main festival Dashain and Tihar. This festival ends at Ashwin Krishna Chaturthi. On the last day, the flagpole erected at Durbar Square will be burned down which indicates the end of the Indra Jatra festival.

Other Festivals Celebrated by Newar 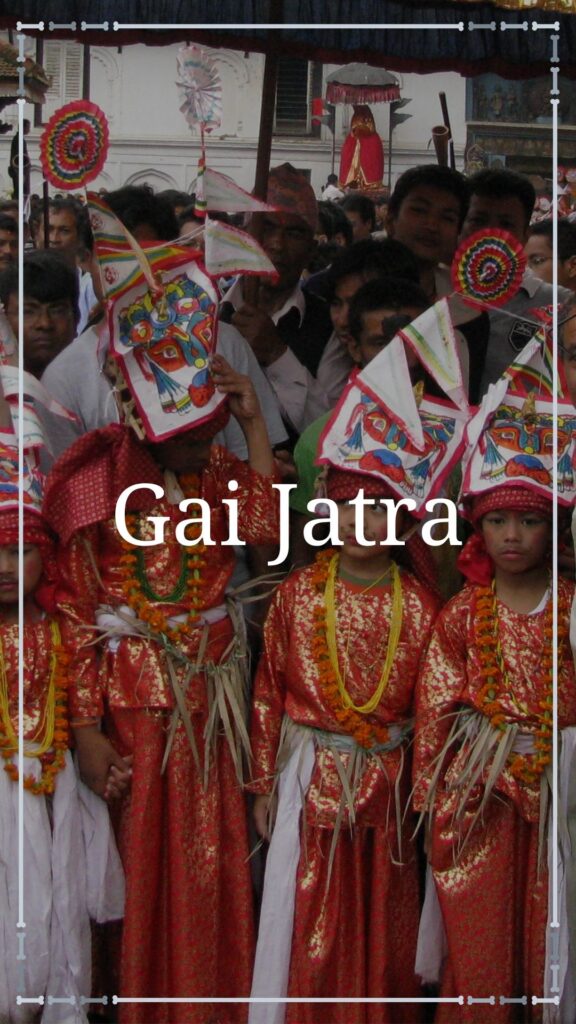