The festival marks the beginning of the winter season.

Udhauli Parva is a festival, mainly celebrated by the Kirat communities of Rai, Limbu, Sunuwar, and Yakhas. Kirats, also known as Kirant or Kiranti, are people from a Sino-Tibetan ethnic group, extending eastward from Nepal to Northeast India. Udhauli represents the winter season which is set on the full moon of the month of Mangsir. Udhauli Parva is a festival celebrated to show gratitude to the motherland or nature for providing them a good harvest. Udhauli Parva is celebrated every year which marks the beginning of winter and the migration period of the wildlife of birds and animals to lower altitudes.

The festival is celebrated to show gratitude to nature for bountiful crops and for keeping safe from natural calamity. It marks the beginning of the winter season which helps animals, birds, and people to migrate from cold regions to warmer regions. Mostly, animals and birds migrate to survive during winter. It can be hard for them to search for food so they migrate. Some animals migrate in order to breed.

Story and Myths behind Udhauli Parva

According to Kirant mythology, there is a boy named “Paruhang ” who lived in heaven. One day, he saw a beautiful girl named Sumnima ” on earth. He fell in love with her and they got married. They had four children. Later, Paruhang left the Sumnima in a small cottage on the bank of Dudh Koshi river. She always waited for Paruhang but he did not return for a long time.

One day, while searching for food, Sumnima found the creeper on a stone. She tasted creeper and found it full of power and high spirit. After that, she made the locket (Buti) with the creeper.

One day, Paruhang returned from heaven. Sumnima gave the Buti to Paruhang and came to know how he had spent all this time looking at heaven and earth from the top of Mount Everest. He said that he had meditated all this time and visited the whole space and time.

Paruhang promised Sumnima that he wouldn’t leave her, which made Sumnima dance with happiness. The name of that dance is Sakela.

In this festival, Kirants worship their motherland or nature which is called Bhumi Puja. They appreciate nature for good harvest and crops. Udhauli Parva is celebrated with lots of fun activities. Generally, women wear dresses made of Chit ko Gunyu. There is a traditional dance which is known as Sakela. Many young boys and girls participate in the Sakela dance to meet each other and find love. During this festival, they also play various musical instruments like Dhol, Jhyamta, etc.

Other Festivals Celebrated by Kirats 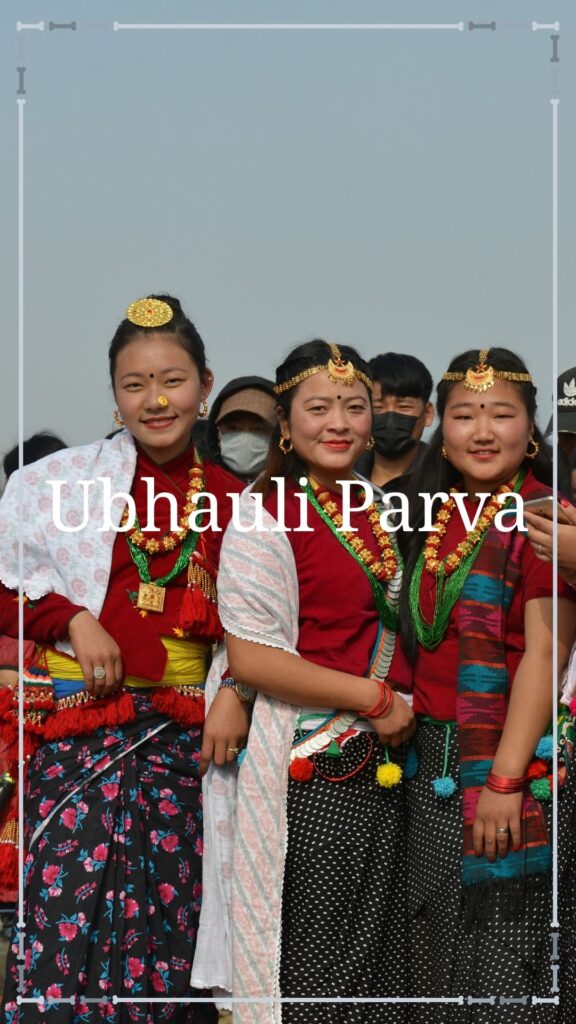